DISTRIBUTION OF DIFFERENT SPECIES OF THE TUBER GENUS IN SPAIN 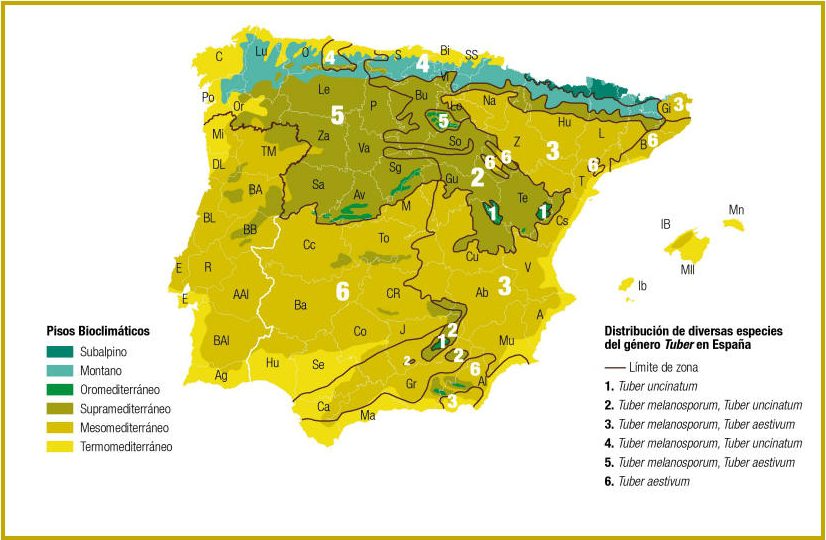 Map of the distribution of the truffle in Spain

The distribution of vegetation in a territory is determined by a series of factors such as altitude (witch determines the bio-climactic floors), precipitation (wich determines the ombroclima), and the type of soil. Keeping these factors in mind, it is also possible to arrange a distribution of the territory that is potencially viable for the development of the different truffle species of the Tuber  genus that grow in Spain.

The black truffle (Tuber melanosporum) is the best known and most valued, but it is limited to certain zones due to the highly specific environmental conditions it requires. Nonetheless, other species exist, such as the white truffle or summer truffle (Tuber aestivum) and Tuber uncinatum, which can grow where the black truffle can’t and which are also edible and valued, as can be seen in the following chart:

The high value reached by T. melanosporum is well known, but the importance the other species have acquired in recent years is notable, with the price reached by T. uncinatum being even higher than that of T. aestivum.

Given that trufficulture is possible practically anywhere in Spain, we believe that it offers a very interesting alternative to crops that are not profitable at the present.

The map shows the distribution of these truffle species, as described in detail below:

● Number 1 in the map, which we have assigned to the species Tuber uncinatum, corresponds to zones of oro-Mediterranean floor and calcareous soils. These are mountainous regions with a humid ombroclima (1000-1600 mm of average annual precipitation), given that this species develops best in shady, cooler zones with a greater availability of water.

● Number 2, which we have assigned to the species Tuber melanosporum and Tuber uncinatum, corresponds to zones of supra-Mediterranean floor and calcareous soils. This floor is marked by lower heights than the previous case and thus temperatures are somewhat higher. In this case, we shall reserve the shadier zones with higher precipitation, that is to say, what we call humid ombroclima, for the T. uncinatum, and the zones with greater direct sunlight and a sub-humid ombroclima (600-1000 mm of average annual rainfall) for the black truffle, given that its hydric requirements are lower.

One must always keep in mind, however, that the black truffle, in addition to needing a calcareous soil, needs a pH range between 7.5 and 8.5.

● Number 3, which we have assigned to the species Tuber melanosporum and Tuber aestivum, corresponds to zones of meso-Mediterranean floor and calcareous soils. The heights in this floor are even lower than the previous one and thus the temperatures are a bit higher. Among the types of ombroclimas we can find in this floor is the sub-humid one, suitable for the black truffle, and the dry one (350-600 mm of annual average precipitation), which is more suitable to the summer truffle, given the range of precipitations the summer truffle can put up with is greater. In respect to pH, the range is also broader for the summer truffle, between 7 and 8.5.

One must always keep in mind that precipitations are irregular and that some years may be dry, without enough rainfall for the good development of the truffles. This is why it is important to have some type of irrigation system and in this case in particular (Albacete, Murcia, etc.) irrigation is essential for the black truffle because rainfall is scarce.

● Number 4, which we have assigned to the species Tuber melanosporum and Tuber uncinatum, corresponds to mountainous and hilly ground, with calcareous soils. This region has greater levels of precipitation than the rest of Spain due to the ocean’s influence. Thus, sunnier zones are more suitable for the black truffle, and the shadier ones for T. uncinatum, always keeping in mind the pH range.

● Number 5, corresponds to zones of acidic soils, which means it will be necessary to make calcareous additions if the pH is lower than 7. With a pH of 7, the suitable species is the summer truffle, given that, as we’ve mentioned, it accepts a broader pH range than the black truffle. The black truffle will be limited to the zones where we’ve raised the pH to 7.5 and there is a greater availability of water.

The forest species with which truffles are associated are adapted to the environmental conditions of each of the regions where those truffles can be developed.

This is generalized information and there will always be cases that need to be studied in a localized way. Cultivos Forestales y Micológicos will provide you with all the information we have at hand to help you resolve, as best we can, any doubts you may have.

The black truffle is commonly known by this name because of its dark coloring, both on the outside and the inside.

It lives buried in the ground, which means help from a trained dog is needed to find and harvest it. The dog can do this thanks to the intense aroma given off by the truffle. The period it can be gathered is from mid-November until the end of March.

Its size varies, although the more abundant it is, the smaller in size. Dry years also cause its size to diminish, as also happens at the end of its season.

Bearing in mind the distribution of the precipitations over the course of the year, the most critical month for the development of truffles in respect to lack of water seems to be June, and for the production to be abundant, August.

The white truffle is known as such because, in contrast to the black truffle, its interior is lighter in color, while its exterior is equally black. It is also known as the summer truffle because it is gathered during the summer months, between May and August.

It is buried at a more shallow depth than the black truffle and at times mounds are visible because it can lift up the ground and even emerge onto the surface.

The number of truffles we can find in each bed is usually lower than with the black truffle, but they are larger in size.

For the white truffle, the most critical month in terms of rain for some truffle growers is July and for others, from February to April; this is not clear because this truffle’s biological cycle is not well known.

Tuber uncinatum despite being scientifically shown to be the same species as the white truffle, differs significantly in its ecology and is even more valued on the market, as we’ve seen.

T. uncinatum grows in cooler, shadier zones and the period of gathering runs from October to November.

It must also be kept in mind that a truffle bed of white truffles will not produce T. uncinatum truffles, nor vice versa, despite the fact that they are the same species.

Apparently, the most beneficial rains for this truffle are those of February and March.

As can be seen, the harvesting periods of the three species encompasses almost the entire year. This, along with the different environmental conditions in which they live, can mean an added plus in terms of supplying the market throughout the year.