«Thanks to Cultivos Forestales the results are satisfactory» 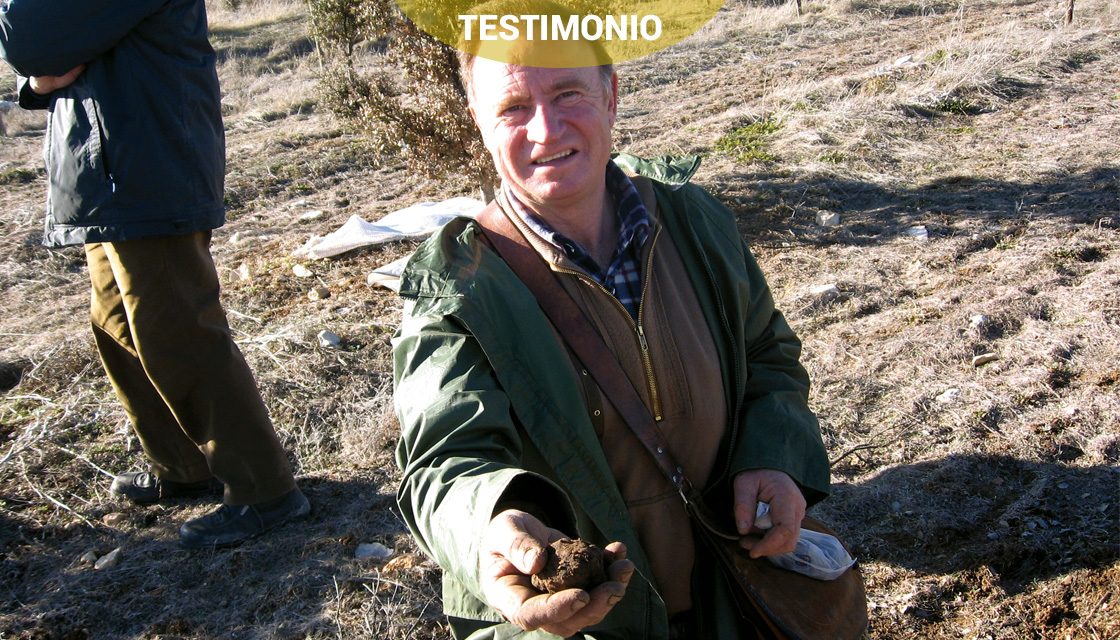 Plantation: Bañón (Teruel)Altitude: 1.260 m«“Our truffle plantation “Los Llanos” consists of small patches planted here and there in the woodland, where it hasn’t been possible to irrigate. The plantations are between 9 and 13 years old and thanks to the fact that the land is cool and to guidance from Cultivos Forestales y Micológicos on how to till the soil, prune and other support, the results are now beginning to be satisfactory.”»

This truffle plantation is located in Bañón (Teruel) on 14 hectares spread out over more than twenty fields, which gives an idea of the fragmented nature of the plantation. All of the plots are located on a high plateau with an average altitude of 1,250 meters above sea level; the land is very favorable to growing truffles, the soil is cool, rocky and calcareous. It belongs to various partners and is managed by Cultivos Forestales.

The plantation was made in three stages and Cultivos Forestales provided all of the seedlings. The oldest plots are now 13-14 years old, and the youngest are 9. The natural arboreal vegetation of the area is Portuguese oak, known here as rebollo or roble (also as gall oak). The plantation has plots where holm oak and Portuguese oak are mixed, others are almost exclusively Portuguese oak, and others are also of holm oak. The choice of forest species was made somewhat randomly except in some shady plots where Portuguese oak was planted, while holm oak was planted in other sunnier plots. The frame of the first plantation was 5×4, while other plots are planted 6×4.

In the first 6-7 years, the corridors between the rows of trees were tilled with a cultivator in the late spring, and in the first two years some hoeing was also carried out manually around the seedlings.

During the period between the 7 th and 13 th years, cultivation was stopped and a peripheral brushcutting of the brûlée was carried out around the most advanced trees.

Although all of the hectares are now managed jointly, there was a period when this wasn’t the case and different areas were managed in different ways.

In the spring of 2013, tilling the soil of all of the plots was resumed with a very defined criterion: to till the zone of influence of the tree’s root at a depth of about 20-30 cm as permitted by the bedrock, which is occasionally quite shallow, and respecting the center of the corridor by leaving it unworked. The tilled part was enlarged over the years in relation to the development of the brûlées. In plots where the corridors are 5 meters wide (it was necessary to respect certain seedling densities to receive aid) the entire corridor is worked.

Through this annual tilling, the zone where the truffles appear is fluffed up to improve the infiltration of water and better preserve humidity. The plots aren’t irrigated, which means this tilling is almost obligatory. The airing and oxygenation of this zone is also favored through this work. Tilling is also done to prune roots to constantly renew the trees’ root systems. Young roots appear in the cuts that are more susceptible to form mycorrhizas and produce truffles. Efforts are also made to ensure that a greater proportion of the formed truffles are located deeper in the soil so that they can better resist a possible period of summer drought and are also less affected by frosts.

For this soil tilling, a cultivator has been adapted that extends from the side of the tractor in order to reach as close as possible to the trees. Given that no nests are made, the spores with accompanying complements (Matertruf liquid) are incorporated from a 200-liter tank that reaches the mix in the soil through hoses on each arm of the cultivator.
The smallest trees are pruned in April to favor their growth and the rest at the end of June or the first two weeks of July. The pruned parts are left in a concentrated way to form coverings on the surface of the brûlées as a protective layer of the soil’s humidity. The branches of the pruning are shredded and added to the soil in the following tilling.

The trees are kept short to favor horizontal branches and avoid branches growing vertically to the ground.

No chemical products, peat, or substrates are used in the plantation; the aim is to grow quality truffles that form and grow in the natural soil of the plot.