“The progress of the plantation has been good” 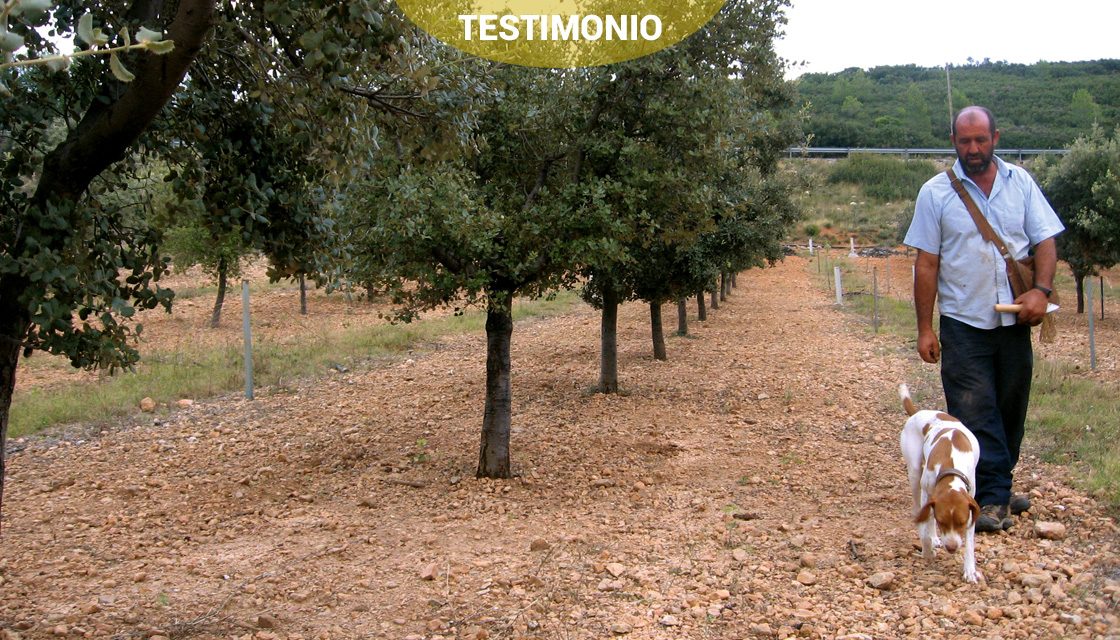 Year  of plantation: 1995“The plantation is now about 20 years old. It began producing after 7 years. Progress has been good. We’ve been irrigating it for 8 years. We’ve maintained high and stable productivity for quite some time. All of the seedlings are from Cultivos Forestales.”

Our relationship with Alberto began more than twenty years ago, when we met at a talk we gave in Sarrión. Alberto had acquired a farmhouse between Adzaneta and Benafigos and wanted to plant truffles. Already at that time he appreciated the quality of two seedling sources and planted the farm over a period of two years with holm oaks mycorrhizated with black truffle purchased entirely from Cultivos Forestales.

The plantation measures 3.5 hectares and is 20 years old, located in a Mediterranean setting at an altitude of 550 meters above sea level in the lowest foothills of the Peñagolosa massif, consisting of terraced banks at the bottom of a small valley. Management of the plantation is exemplary given that the person in charge – Paco – is passionate about the world of truffles and has been a truffle hunter since a very young age in the woodlands of the county.

Paco was a pioneer in terms of permanently tilling the zone of influence of the tree’s root, in other words, that part of the ground where the truffles appear, and in leaving an unworked, green corridor in the center of the row, thereby forming a border with the tilled area. Each year, towards the end of March or in April, he tills the productive zone, improving the sponginess of the soil, favoring greater oxygenation and preserving humidity, as well as breaking the roots, which thus permanently encourages a renovation of the tree’s root system.

During these years and more especially in the past decade, we’ve developed a close relationship with Paco, exchanging opinions and perspectives about the world of truffles in general and the management of plantations in particular, in an open way that has been instructive to us both.

In recent years, he has decided to focus more deeply on tilling the soil. On the other hand, the substrate he prepares for the nests isn’t at all conventional. He uses a very well-prepared mix based solely on vegetable remains, earth, etc., which improves the quality of the harvested truffles in respect to peat substrates, and also contributes spores to the soil at the start of each spring.

The farm has a drilled well that feeds a pond that is used for irrigation.

High sprinklers are used to irrigate when necessary, essentially in summer; remember that the land is at 550 meters above sea level and the summer is hot although the zone is favored by periodic storms. In some years, to alleviate the summer heat when the truffles are already formed in the ground, a shade cloth is placed a meter above the ground in the productive area that is most punished by the sun.

Until last year, the substrate in the nests was placed manually in holes, although over the year a device was designed to place it more quickly.

Care has always been taken to ensure that the machinery used for these tasks (tractors, implements) is not heavy in order to avoid overly pressing down on the soil. The level of care is so great in this sense that they have purchased an old tractor with caterpillar treads so that the weight of the machine is spread out over a greater surface area.

An important maintenance pruning is carried out each year, opening the trees in a similar way to that of almond trees, lightening the growth in the center and maintaining the tree clean up to a certain height. Aerial pruning is also considered important in the permanent rejuvenation of the host tree and, in the specific situation of this plantation (mild climate and irrigation), it is even more important, given that the trees grow a lot and must be kept at a size appropriate for maintaining an open environment in the plantation.