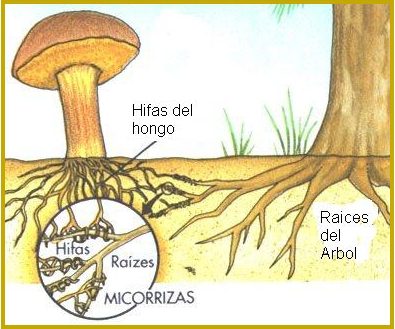 What is a mycorrhizated seedling?

A mycorrhizated seedling is the symbiosis between a plant and a fungus. This association is the norm in plants and it is even common in nature for different fungi to be associated (mycorrhizate) at the same time with the same plant, something that is quite common in forest trees. The word “mycorrhiza” refers to the fungus (myco) and the root (rhiza) and derives etymologically from the Greek. The symbiosis between plants and fungus is the norm in nature; marine plants wouldn’t have been able to colonize the land millions of years ago if fungi hadn’t already previously existed on land; what is more, when a forest expands into new land, an advance group of certain fungi first implant themselves there to facilitate the later implantation of the trees. 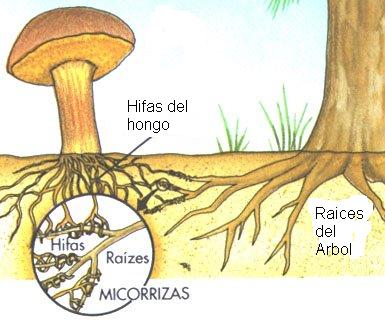 Drawing of a tree associated with a fungus that has produced a mushroom.

The type of symbiosis that plants form with fungi varies from one type of plant to another. Generally, forest trees associate with a broad range of fungi, forming what are called ectomycorrhizas. In these mycorrhizas, the aspect of the tree root is modified by the presence of the fungus, generating small lumps at the ends of the finest roots, in the form of minuscule match heads (visible only in the laboratory with a stereoscopic microscope, magnifying glass, etc.). Most other plants, including fruit trees, grapevines, bushes, herbaceous plants, etc., establish mycorrhizas with a relatively small number of fungi. This type of mycorrhiza is called endomycorrhiza and does not modify the exterior aspect of the plant roots; the fungus penetrates with its hyphae into the interior of the cells of the root of the plant, whereas in the ectomycorrhizas of forest trees, the fungus only occupies the intercellular spaces of the root’s tissues. The truffles form ectomycorrhizas with forest species; in the case of the black truffle, it primarily associates with holm oaks, oaks, hazelnut trees, kermes oaks, etc. 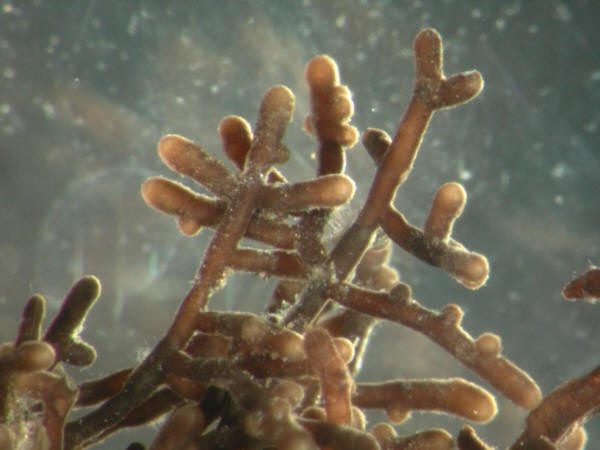 Aspect of truffle mycorrhizas as seen through a stereoscopic magnifying glass. 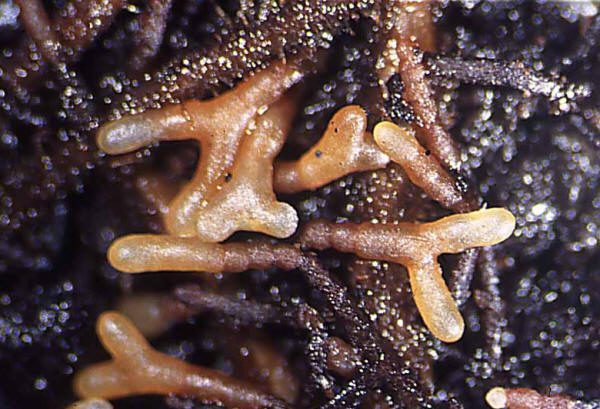 Both tree and fungus benefit from this symbiotic relationship. The tree benefits from a greater capacity to acquire water and nutrients from the soil given that the fungus broadens the area of ground occupied by the plant root, and the fungus also acts as a protector of the tree’s root against pathogenic invasions, etc. The fungus, meanwhile, uses for its growth and development sugars and different photosynthetic products that the tree produces by means of green chlorophyll with the sun’s energy (photosynthetic function). Fungi don’t have green parts and cannot perform photosynthesis. These advantages for both parties described here are only the most important ones. 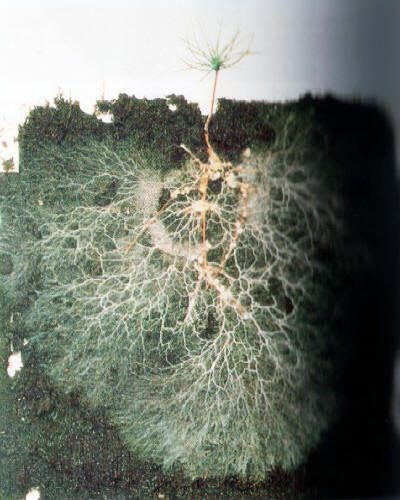 The enlarged white points in the pine roots are clearly visible: these are the mycorrhizas. From them emerges a tangle of white filaments, which are the hyphae, which form the mycelium and which expand into much more space in the soil than the roots themselves of the tree could.

Known examples of symbiosis between trees and fungi are truffles, saffron milk cap mushrooms, boletus, etc. When mushrooms appear in the forest in autumn, many of them live associated with trees, while others grow solely taking advantage of the organic material accumulated in the first layers of the soil (saprophytes), there are even some fungi that can behave in both ways, as saprophytes and in symbiosis with plants, depending on the circumstances. 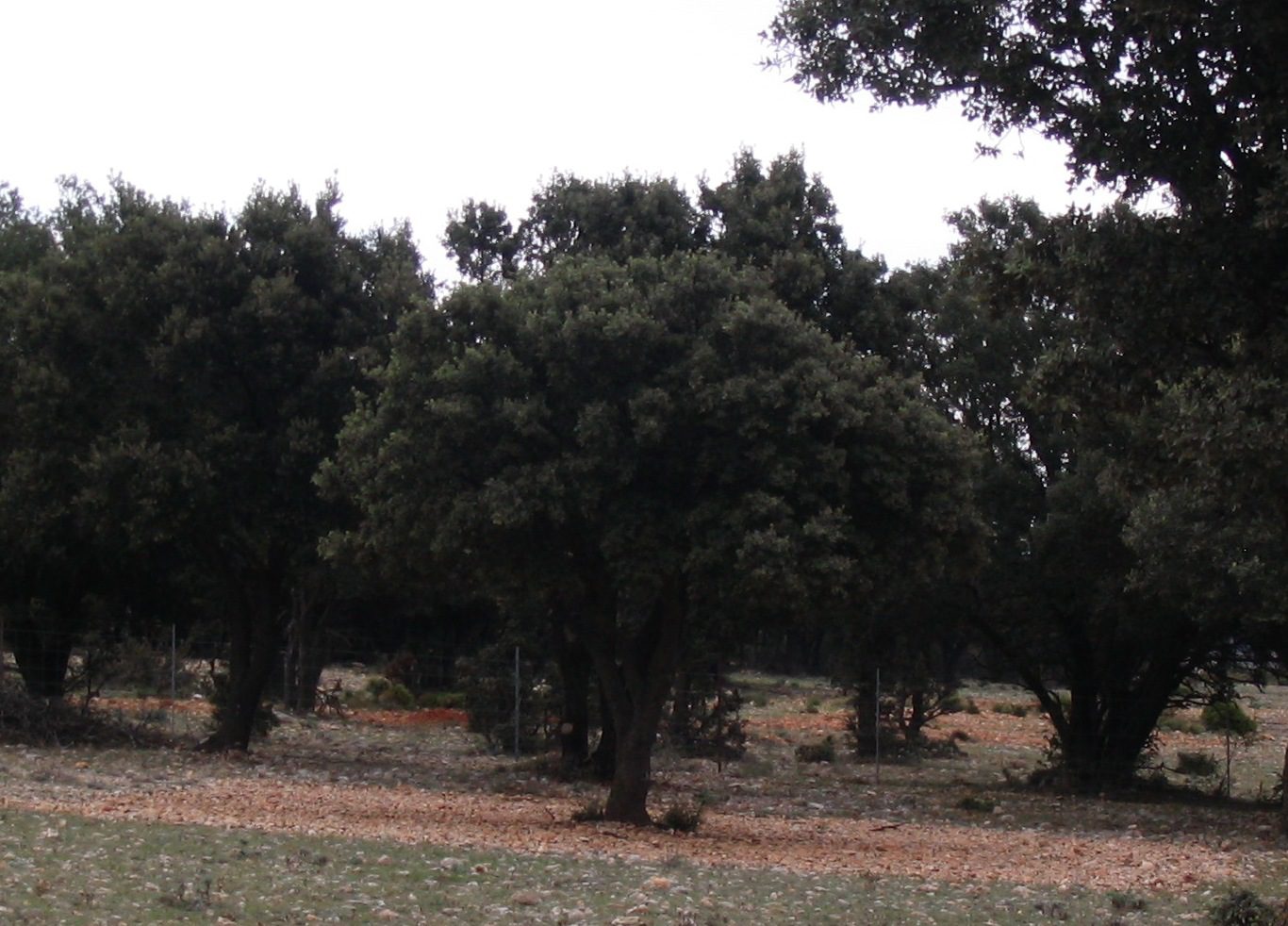 Adult holm oak with a zone free of weeds (brûlée) produced by the fungus of the truffle. Truffles are gathered in the zone of the brûlée.