Mushroom by mushroom, characteristics and properties 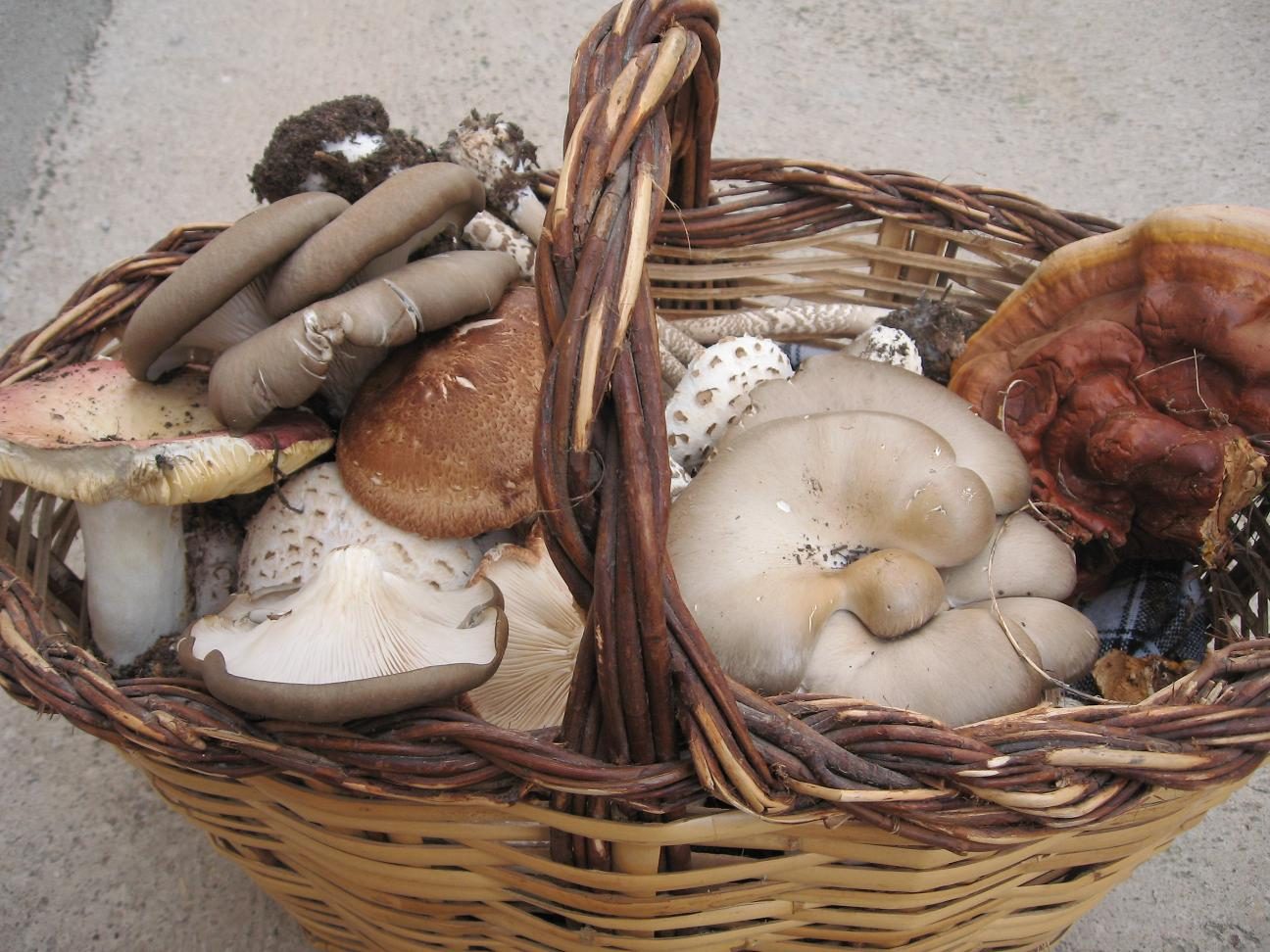 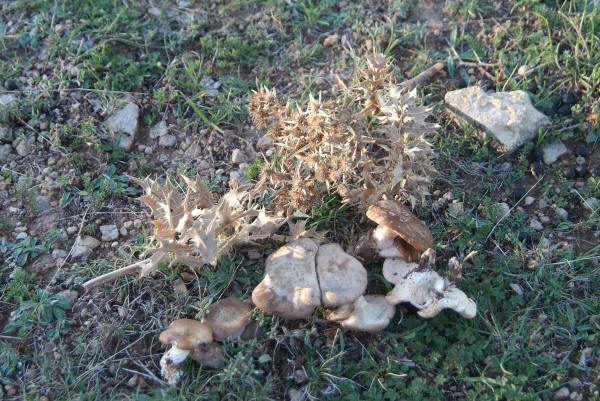 Commonly known as the king trumpet mushroom. The cap is dark brown to brown and the stem is eccentric. It has a light, pleasant aroma and a sweet taste.

It feeds primarily on the root of the field eryngo (Eryngium campestre), although it may also invade aromatic herbs and other umbellate ones. It grows on uncultivated land and meadows. The primary period of fructification is autumn and spring, although it can also fructify in summer if the temperature is mild.

It is one of the most savory and sought after mushrooms; it combines well with all types of food and is easy to digest. The flesh is white and has an exquisite flavor.

In terms of its properties, it is rich in proteins, vitamins and minerals, and is very appropriate for low-calorie diets. A recent study has shown that it can stimulate the “osteoblasts” or cells that form bone. These initial studies still need to be corroborated, but if this turns out to be the case, it can help people who suffer from osteoporosis to have a better quality of life.

The king trumpet mushroom is also a valuable source of anti-oxidants. 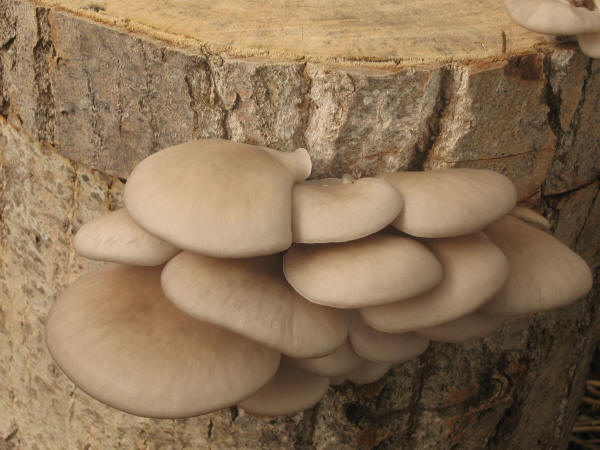 Commonly known as the oyster mushroom, its color varies from greyish to brown tones. Its stem is lateral. Its size varies depending on the conditions in which it grows.

It grows forming bunches on stumps and tree trunks of broad-leaved trees. The primary period of fructification is in autumn. It is best to harvest it young, before it develops too much, maximum 10-12 cm.

It is one of the most commercialized mushrooms. It is rich in proteins, fiber, minerals and vitamins, notably the vitamins of the B group, vitamin D, and zinc as a trace element.

Most notable among its health-producing benefits are its anti-cholesterol actions through the effects of lovastatin, a natural statin that has none of the side-effects of chemical statins. It also has anti-atherosclerosis and anti-tumor qualities and is rich in anti-oxidants.

It is a good food whose quality and properties are greatly improved when it is harvested on trunks and out-of-doors. 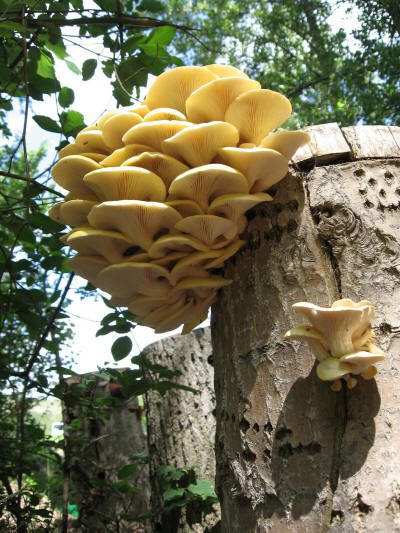 Commonly know as the branched oyster mushroom, it is native to subtropical zones of china and southeastern Japan. It is notable for its yellowish color and for having longitudinal lines in relief on its stem, wich are the prolongation of its gills.

Its grows on ther dead wood of different broad-leaved trees, primarily poplars and elms. It can be found from April to Novemberand and has an exotic yellow color.

Its properties are similar to those of the P. Ostreaus. It is said to be a cure for pulmonary emphysema. 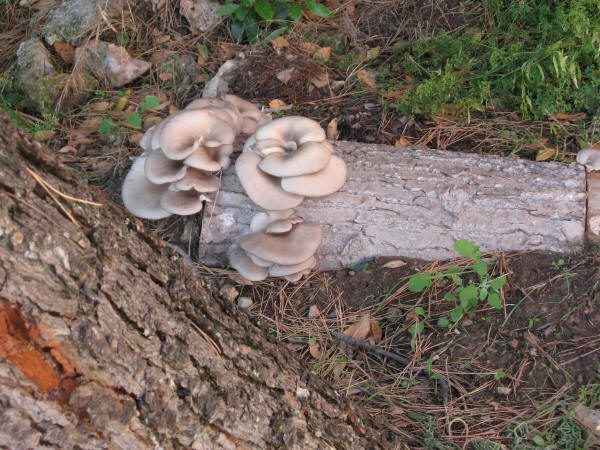 Commonly known as the Indian oyster, Italian oyster, phoenix mushroom, or the lung oyster mushroom. Its cap is light brown and generally smaller than the P. ostreatus. It has a short and eccentric stem. It grows in sparse bunches or on its own.

As with the previous mushrooms, it grows on the trunks of broad-leaved trees and fructifies primarily in autumn.

Its nutritional content and properties are also similar to the previous mushrooms. 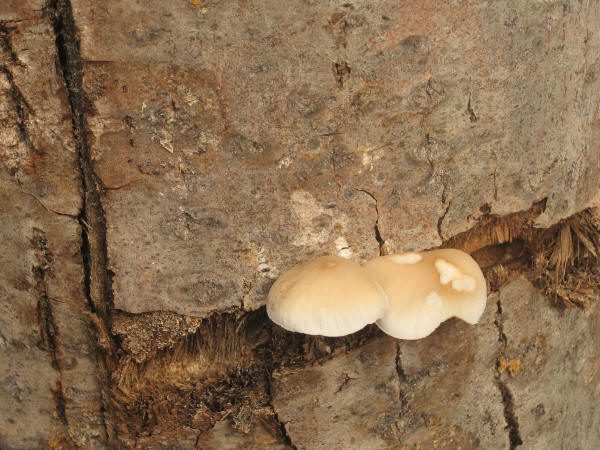 Commonly known as the poplar mushroom. The cap is at first hemispheric and brown in color, later extended and paler. The stem is long and has a ring on the upper part. It grows in dense groups on stumps and trunks of poplars and other broad-leaved trees.

The primary period of fructification is in autumn or spring, although it can be found throughout the year after the rain.

A good food, with a pleasant aroma and flavor.

Commonly known as the shitake mushroom. It is native to East Asia and grows on wood. It has a brown cap, with white scales in the form of a crown. It is highly valued in China and Japan both as a food and for its medicinal properties. Its gastronomical quality is extraordinary and in the East it has been cultivated for 2000 years.

It contains the essential amino acids, is rich in iron, calcium, zinc, vitamins of the B group, vitamin E, and pro-vitamin D, unsaturated fatty acids and a large amount of polysaccharides, most notably lentinan.

The shitake mushroom stimulates the body’s defenses through the effect of lentinan, favoring the creation of macrophages and T-lymphocytes, which, combined with its anti-viral and anti-bacterial properties, makes this mushroom an excellent way to maintain the body’s defenses high to combat infections.

Lentinan also develops an indirect anti-tumor activity by stimulating the macrophages, eritadenine and choline, contained in the fungus; these have a positive effect on cholesterol and hypertension. The properties described above are only the most important but by no means the only ones, because this mushroom is a true gem for maintaining one’s health. 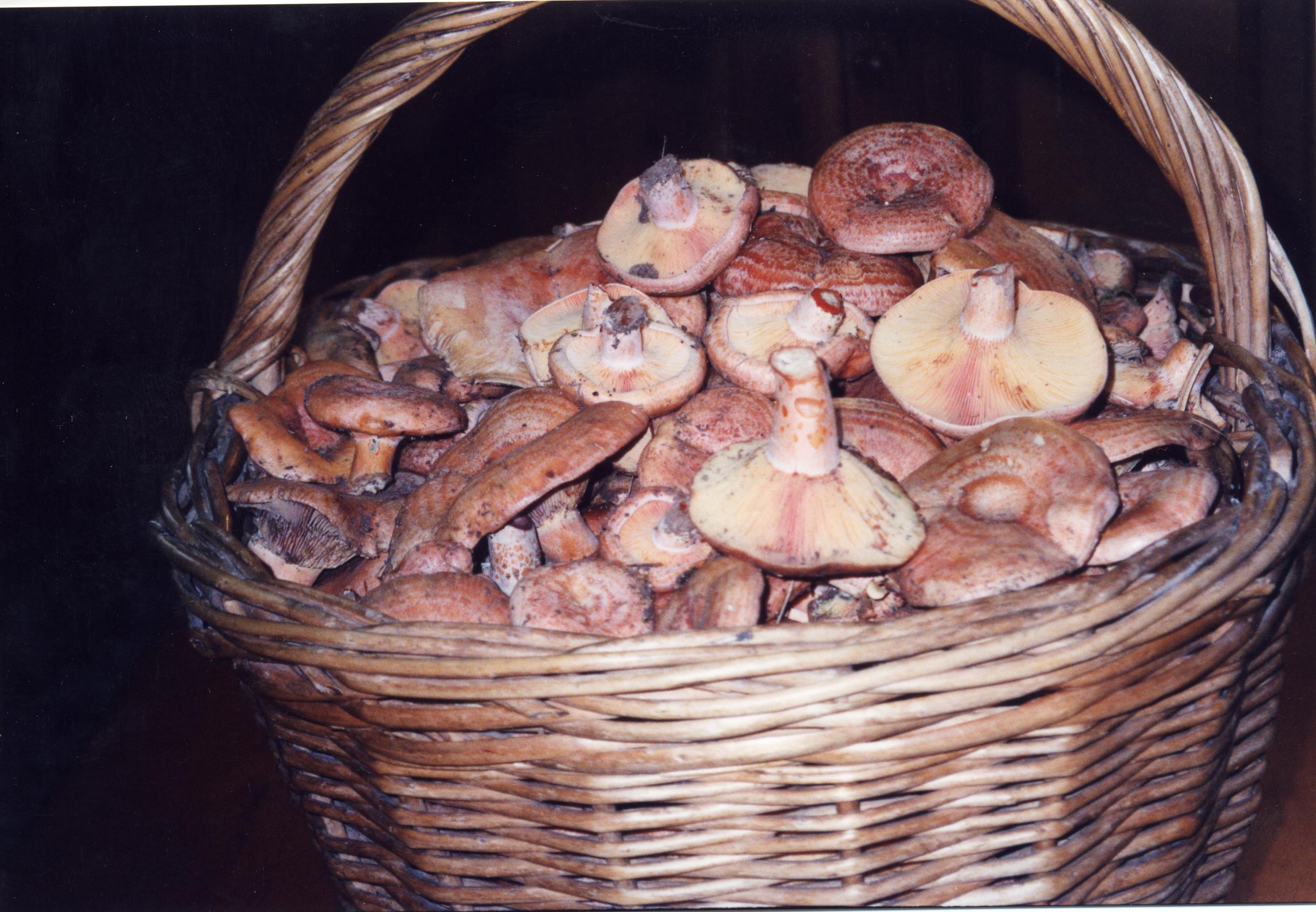 Commonly known as the saffron milk cap mushroom or red pine mushroom. It is orange red in color with darker concentric bands. Greenish tonalities are visible on the underside that increase as the mushroom ages. This is perhaps the most popular mushroom in Spain and is particularly valued in Catalonia.

It establishes symbiotic relations with the roots of pine trees, which means it can be found in coniferous forests. The period of fructification is autumn.

It is a good food. 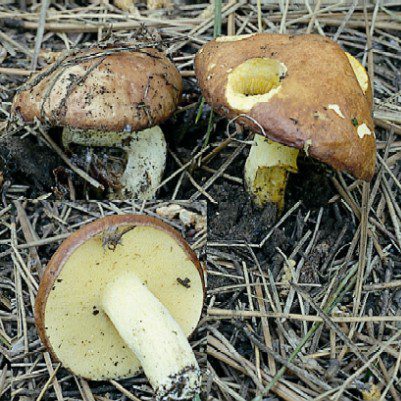 Commonly known as the slippery jack mushroom, it includes three or four species that are of culinary interest. It varies from light to dark brown. The cuticle is very viscous. The underside is porous and yellow. It has a pleasant, fruity aroma. A good food.

It fructifies beneath pine trees and is very abundant. It is among the first species to appear after the rain.

Commonly known as the summer truffle. It is globular and irregular in shape and is covered with lumps. It is black on the outside, while inside it is at first whitish and then becomes yellowish as it ages with veins that are also light colored.

It fructifies underground at some centimeters from the surface, associated principally with species of the Quercus genre, with which it establishes mycorrhizas. The period of fructification is late spring and summer.

It is flavorsome despite being of less quality than the black truffle. 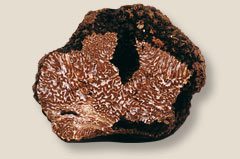 Biologically, it is very similar to the T. aestivum, and is thus considered a variety of that species. Nonetheless, it can be differentiated from the summer truffle because its fructification occurs in autumn and is primarily associated with pine trees.

It grows in zones of higher altitude with greater hydric availability than T. aestivum and with less severe periods of drought than T. melanosporum.. 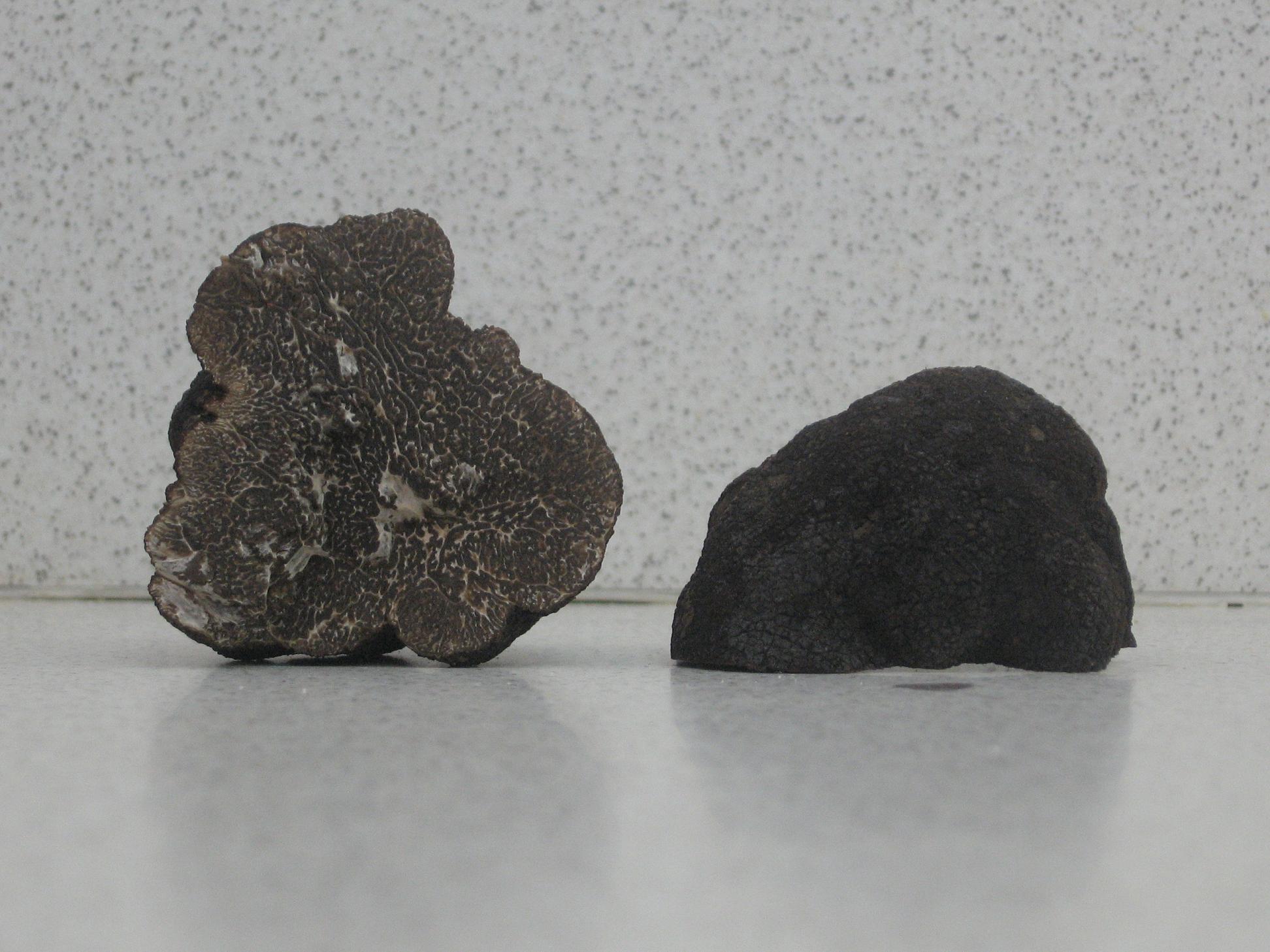 Commonly known as the black truffle. It is tuber-shaped, irregular and globular. The outer surface is also covered with lumps and is black, while the inside is dark brown and is lined with white veins.

It has an intense and fragrant aroma, for which it is highly prized gastronomically.

It grows in zones of Mediterranean climate or in continental areas with Mediterranean influence, in conditions that are more demanding than those of the summer truffle. It lives associated primarily with holm oaks (Quercus ilex), Portuguese oaks (Quercus faginea), kermes oaks (Quercus coccifera) and hazelnut trees (Corylus avellana) and matures in the winter.